The company was formed in 1935 as L.A. Brook by Leonard A Brook for the purpose of producing Industrial Wipers from reclaimed textiles. The business was based in South Street, Bradford Road, Dewsbury where they employed women to ‘trim’ the waste, which had been previously washed, in to useable sized pieces and then packed in to 1cwt [approx. 50kg] hessian sacks. Even at this early stage they offered 12 grades of wipers, cotton [engine] waste and stockinette rolls. The Wipers were sold to users and merchants, for re-sale – a printed price list from 1935 shows prices starting at 24/6 [£1.22] to 48/- [£2.40] per cwt [50kg]

As business increased the company moved to Wellington Road, Dewsbury and became known as L.A Brook - Cleaning Cloth Manufacturer. With the volume of business it was necessary to utilise two industrial laundries and in 1954 the company became the first of its type to obtain a certificate from the Medical Officer of Health covering the process of sterilisation. Another industry first was to pack the wipers in 28lb [12.5kg] or 56lb [25kg] cartons, an idea that competitors had to follow.

During the 1950s a further move was made, this time to a three story mill on Bradford Road, this was later extended and modernised but the three storey section and part of the new building was destroyed by fire in 1979 and the production of ‘Rag’ Wipers finally ceased. Fortunately the company was able to take over adjoining warehousing and remained on the site until the move to Royds Mill in 1990.

During the time at Bradford Road the company changed its focus. Industrial Cleaning Materials Manufacturing Co. was formed to expand the sales of commercial textiles, soap powders and other cleaning products and the main company became L. A Brook of Dewsbury Limited. During the early 1960s a new paper wiper was being manufactured in the U.S.A, the Kimwipe 10” and 20” wiper roll – a small quantity were purchased and our long association with Kimberly Clark began. From then on our range of products expanded taking the company in to new fields, no longer just our traditional industrial markets but also in to commercial premises, schools, hospitals and local authorities.

In January 1990 the company, now trading as L. A. Brook Limited, moved in to Royds Mill in Ossett. During its time at this site the company has evolved further with and ever expanding range of Cleaning and Hygiene Products and the addition of PPE and Workwear. 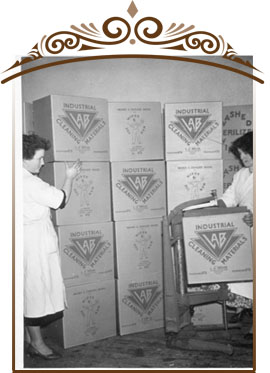